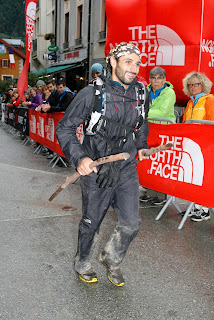 Jeremie Rafi Tabrizi works hard as the Assistant Professor in Genetic Medicine in the Research Division at Weill Cornell Medical College in Qatar and in his spare time he also plays hard, competing in torrid ultra distance trail runs at high altitude in the mountainous regions around France, Italy and Switzerland.

The four races all differ in grade, intensity and distance but have one thing in common. They are equally tough, difficult to master and require a superior level of strength, fitness and determination to finish.

“This has become something of a family event for us,” Dr. Tabrizi said. “We enjoy going there as a family. The kids love the place for the vacation and I enjoy running in the region.

Over the past few years, Assistant Professor Tabrizi has competed and finished every event in the series. It is regarded as the premier race meeting in international long distance trail running. This season he took on the challenging 119km TDS Sur Les Traces des Ducs de Savoie race that starts at Courmayeur, in northern Italy, in the foothills of Mont Blanc.

The TDS race covers around 119km and goes around Mont Blanc, the highest mountain in Western Europe. There is a cutoff time of 31 hours and 30 minutes for the 1400 competitors who reach a height of more than 2,000 meters during the race.

Organizers describe the TDS race as the wild alternative. It is a mountainous event that includes several sections at altitude above 2,500m), in weather conditions that can be very difficult with bitterly cold nights, strong winds, rain or snow. The route takes a narrow passage up to the Col de Gitte at 2322m where runners are greeted by an amazing panoramic view of the mountain chains of Mont Blanc and surrounding peaks before crossing the nose of the Bionnassay glacier by footbridge towards the finish at Chamonix.

“It sounds a whole lot harder than it really is,” Dr. Tabrizi says modestly of his achievements. “Its not as demanding as triathlons or the marathon because it is more building on resistance. So, it is not what I do in this year that affects my race but it is what I have done in the last five years.

“So every year I am going through, it becomes easier for me as I build up resistance. But I have to run at least five to seven hours per week to stay in condition. At this rate you don’t really increase your level. You need to do a lot more running to increase your level of achievement.”

Seven refreshment posts are located along the way where runners are supplied with drinks and food to be consumed on the run. However, the principal of the event is to be semi-self-sufficient and runners have to carry small amounts of food and clothes for the colder areas.

“It can be quite lonely at times. Apart from the refreshment stations, it is not unusual for runners not to see any other competitors for five or six hours. So you are alone. It is a semi-autonomous race.  There was one race where I did not see any competitors except for the end of the day. It’s a mental sport; you have to manage your pain and the desire to stop. It is harder running marathons. But there is also extreme euphoria at the end when you think you are the king of the world.

“The whole concept of these races is – you start it and you go through a range of emotions. Everyone goes through it and you think ‘am I going to finish it or will I have the strength to finish it’.  You have to dig very deep inside yourself to find a good reason to finish it. So you build on the positive images of your life and that keeps you going beyond your limit. It’s a very different psychology. You build more on your mental strength, rather than your physical strength.

“The race time is not so important, it is more the challenge of finishing.  This year was interesting because the race was not long but it rained for 30 hours. It rained almost the whole race and it was very cold. You need to know how to recognize and how to manage the stress of hypothermia.