All the intrigue and bloodletting of a Shakespearian drama was unleashed when 900 students from Sharjah Men’s College and Sharjah Women’s College packed out the new auditorium for a spectacular production of Hamlet.

Maybe they missed those immortal lines “to thine own self be true”, maybe not but for nearly two hours you could hear a pin drop in the new auditorium as students sat transfixed by the action on stage. Hamlet is Shakespeare’s longest play but this did not bother the audience as they enjoyed a magnificent performance of this popular tragedy presented by TNT Theatre Britain.

This adapted version of Hamlet was directed by Paul Stebbings and produced by Grantly Marshall. SMC and SWC students were treated to a first class production from the very opening scene up to the murderous end with bodies littering the stage. The cast and crew did not disappoint and the students appreciated the quality performance.

Hassan Ali Al Azem, a Higher Diploma business student and his class mate Abdullah Juma Abdullah agreed it was an amazing experience. “I have not seen anything like this before. It was amazing. The actors are so good. Hopefully we can see more of these sorts of acts at Sharjah Colleges in the future,” Hassan said. 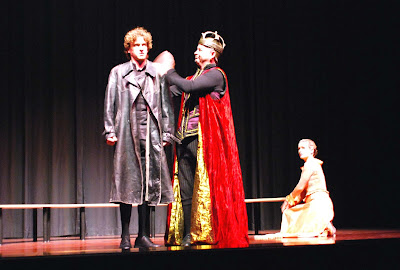 For Abdullah Salie, Diploma Year 1, it was all a bit of a surprise. “I did not know what to expect,” Abdulla said. “I was here only for interest sake but I am glad that I came along. It was a great performance and I enjoyed it.

“I can’t explain but it made me feel different. This is my first experience of the theatre and I felt different after watching it. They were all acting so well. I was surprised that no one forgot their lines,” Abdullah said.

As the underlying themes of revenge and punishment played out before their eyes and the ghost of old Hamlet may have reminded a few astute observers about old campfire yarns, it was pleasing to note not a single student left the auditorium. They were enthusiastically engrossed in the performance.

The lead role of Hamlet was played by Richard Keightley, who trained at Drama Studio in London. He is an accomplished actor and has performed in many Shakespearian plays including Othello and A Midsummer Night’s Dream. Richard Clodfelter played the part of Claudius and Natalia Campbell was Gertrude.

Natalia Campbell, with her impressive vocal range also added to the musical score. She trained at Le Strasberg Studio and Middlesex University in the UK. She is also an accomplished performer and her TV work includes stints on Eastenders and she has also worked for the BBC and Discovery Channel. 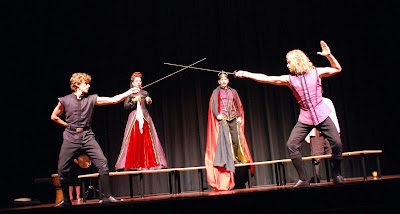 Richard Ede played Horatio and Polonius was played by American actor J.C. Hoyt. Sophie Franklin, who graduated from the Guildford School of Acting in 2002, played Ophelia. This talented young performer has already had significant roles in The Tempest at the famous Vic Theater, The Taming of the Shrew, Kittle Women and she played the part of Abigail in The Crucible.