SWC faculty member off to rub shoulders with Nobel Laureates

Sharjah Women’s College engineering faculty member Arif Karrani is off to attend the 58th Meeting of Nobel Laureates in Lindau, Germany during the summer break from June 29 till July 4.

Mr. Karrani said he was honored to be selected to attend this prestigious gathering of the world’s great minds. He will be among more than 800 researchers and the only HCT faculty member to attend this year’s meeting.

The Lindau gathering usually attracts about 50 Nobel Laureates in one specialization (this year in Physics) and it is a coveted meeting for researchers from around the world.

“This is a great achievement not only for me but also for the Sharjah Higher Colleges of Technology. I am very humbled yet grateful for the opportunity,” Mr. Karrani said. “It indicates the high profile of our engineering department and the quality of our faculty.”

“I thought it was some kind of unwelcome attention. You can just imagine my surprise and delight when they informed me that I had been selected on the recommendation of our College Director, Dr. Farid Ohan, and the HCT Vice-Chancellor, Dr. Tayeb Kamali. I am looking forward to this conference and I am sure that there will be lots to learn that will be of benefit to our students and to Sharjah Colleges.”

Each year, since 1951, around 20 to 25 Nobel Prize winners accept invitations to a unique meeting on Lake Constance. Hundreds of students from around the world some to listen to the Laureates’ lectures and to engage in discussions with them. Intermediaries from universities and research institutions also select participants based on strict criteria.

Started in 2004, there is an addition to the traditional Lindau Meetings for Nobel Prize Winners in Natural Sciences. Since then the Meeting of Prize Winners in Economic Sciences takes place every two years. More than 350 young and highly qualified economists are selected and get the opportunity to converse with the Prize Winners. 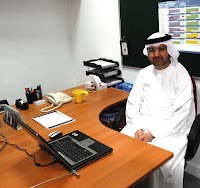 The Laureates give presentations on topics of their choice. Lively round table discussions in plenary sessions include the audience and are defined by interdisciplinary questions. Specially organized student discussions have students gathered around a designated Laureate per group for several hours in the afternoons. Social events bring the scientific newcomers into personal contact with the Nobel Prize Winners.